This brief update on my son’s immigration situation originally appeared in my GeoHipster interview last week.

For those who may not know, last December my son was deported to Bulgaria — a country he does not remember and whose language he does not speak, but where he is “from”. We are working on bringing Eni back home. We are pursuing all possible avenues. This will be a long and complicated process. Meanwhile he has settled in Sofia, has found a job that he likes, and is making friends. He is in good spirits. We communicate via social media and chat almost daily. My son is making the most of this bizarre and unfortunate situation, and has made me proud with his ability to handle adversity.

I want to thank the hundreds of people, most of whom I have never met, for their outpouring of support for my family’s plight, and for reaffirming my faith in humanity.

It has been two weeks since my son was ripped away from me, from family and friends, handcuffed, and deported to a country he doesn’t remember. The past fourteen days have been a roller coaster of emotions and a whirlwind of activities. The tears have dried, but the pain remains.

In the days following my son’s removal our family received overwhelming support from friends and strangers who were shocked and appalled by this injustice. To all who helped — by making phone calls, by donating money, by sharing our story on social media, by offering a kind word or a sympathetic ear — I thank you from the bottom of my heart for reaffirming my faith in humanity. With your help we have raised over $11K to finance Eni’s legal return to the only home he knows.

Support wasn’t unanimous. We heard voices saying that what happened to my family was just, and that physically removing my son (who came to the US legally at the age of 2, who is a taxpayer, a productive member of society, and who has no criminal record) was the right thing to do. These voices are a sad reminder of the divisive times we live in — times in which humanism is replaced with political dogma, and critical thinking is replaced with a bumper sticker slogan.

“You shall have one standard for stranger and citizen alike.” —Leviticus 24:22

We will continue our legal fight, and I will not rest until my son is back home where he belongs. 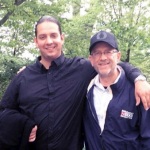 I brought my son Eni Entchev from our native Bulgaria to the US in 1993, legally, when he was two years old. After a quarter-century legal ordeal with the US immigration authorities (and tens of thousands of dollars), last Thursday he was deported to Bulgaria — a country he doesn’t remember, and whose language he doesn’t speak, (but where he is “from”).

Where is one from?

While he is foreign-born, my son is American in every conceivable way. He grew up with Rugrats, Ren & Stimpy, and Hey Arnold! He loves McDonald’s. He loves fast cars. He speaks with a New Jersey accent. He loves his American fiancee. He gets passionate about American politics. He pays taxes, salutes the flag, and quotes the Constitution. He never gives up.

He is from America.

The United States is Eni’s home. He has lived here all his conscious life. All his family and friends live in the US — fiancee, mother, father, sister. His job is here. The US is the only home Eni knows. He has no criminal record.

My family’s 25-year-old immigration saga continues. We are pursuing all available legal avenues to bring Eni back home and reunite him with his family. We need help to cover his legal expenses, as well as his living expenses while overseas.

Please help me bring my son back home.

[EDIT] In this space the original post had a link to a GoFundMe campaign raising money for Eni’s legal and living expenses. The campaign raised $12,631. Heartfelt thanks to all who donated!